Next weekend, I'm attending the Headshot Intensive in Stockholm, Sweden. This workshop is a two-day event led by one of the world's best headshot photographers, Peter Hurley.

Peter's based in New York City, and has been doing headshots for actors and business people for over a decade. A few years ago, he started teaching his stuff to other photographers in a DVD called The Art behind the Headshot, produced by Fstoppers.com.

Here's the preview for the DVD:

I've been following Peter for a couple of years online. His way of working with people to get expressions out of them is amazing. At the Fstoppers Workshops at the Bahamas 2014, I met Peter for the first time, and he's truly a great guy. We had dinner the first night at the Atlantis, along with the Fstoppers guys and several students who arrived early. On the "day off" from classes, Peter took a bunch of us out sailing with two America's Cup class sailing boats. Great fun!

After the workshops, I visited Peter's studio on Manhattan as well, and picked up a couple of his Proboard backgrounds at B&H Photo.

Unfortunately, his workshops were booked so fast that I wasn't able to attend at the Bahamas. Luckily, he told me he's doing a European tour in July and that he'll start it with a headshot intensive in Stockholm, Sweden. Finally!

So, next weekend, I'll be joining his headshot intensive. Apart from meeting Peter again, I will also meet a friend from the Fstoppers workshop at the Bahamas, that I recently attended.

Really looking forward to two days of intensive headshot work. As far as I can understand, the first day will be the theory behind Peter's method. The second day will be all shooting. And if I know Peter right, it will be intense! 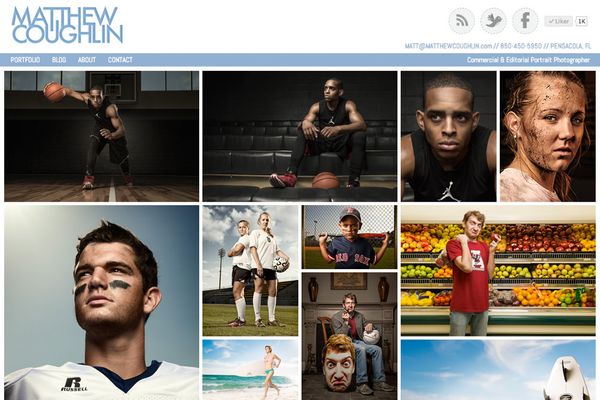 Matthew Coughlin started out on his path to become a professional photographer a couple of years back. He’d been working with video editing and was looking for a new career in photography.

Joel Grimes is one of my all time favorite photographers. I came across him through a series on lighting on Framed Show. Joel shoots beauty and fashion for the most